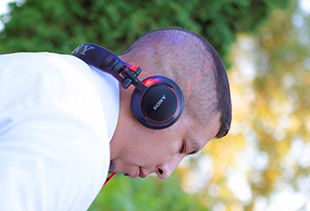 DJ Krayzie-C aka Cesar hails from the small town of Othello, WA. In Othello, there wasn't much of a music scene at all either on the radio or on the tv, so any chance that he could explore music he was all over it, his favorite store at the time was FYE in the mall. More and more he wanted to be more involved in music.

As the draw to music became too much to ignore, Cesar sought out the Numark "DJ in a box" kit and combined it with his home CD changer and began DJing as a hobby for his friends and family. Nurturing his love for turntablism, he constantly practiced and fell even more in love with how sound and songs can be manipulated to create the beat that moves the crowd.

Over the years Cesar refined his craft through hard work, practice, and a love of music. He has DJed at local clubs Town Crier, Coco Locos, Club Paradise, The Jungle... large city events such as Slide the City, Fiery Foods Festival, Fire on the River... and concerts such with artists including Sir Mix A Lot.

Now based in the Tri Cities area of WA, he has expanded his music knowledge base to include all types of music, giving him the ability to play for any crowd at any event... providing fun and memorable experiences for everyone!

Have fun and Win Cash!